Why did you choose Environmental Science at Aarhus University?

I found an interesting project on microbial ecology

“After my master I realized that if I was going to continue for a PhD study it would be better to go abroad. Therefore, I extended my search for projects to all of Europe. My decision to choose the PhD position at Aarhus University, was based on the project description which was more related with applied environmental science. In addition, the project could give me the opportunity of expanding my knowledge in other areas of soil microbiology, such as the world of protozoa.

“My supervisor helped me to find a room in a house which I share with four colleagues from Aarhus University and the neighboring Technical University of Denmark. That was very nice, because they could help me navigate - and fight the loneliness periods.

Even if the secretary and other colleagues from the institute tried to help me with the paperwork in relation to local authorities, I messed it up, but it ended up well. The information about how to proceed was a little bit misleading, but now the situation has improved, since we have more foreigners and we are getting used to it.

It is an advantage that the laboratories are not overcrowded. I speak English with my colleagues, but sometimes people speak Danish at meetings or in the canteen – which I don’t.” 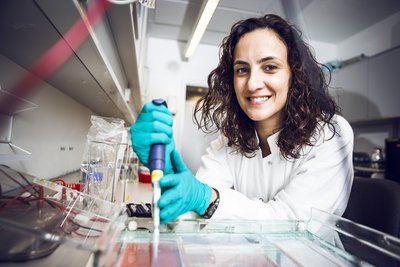 “I have studied environmental engineering at DTU, but chose to write my Master’s thesis here, because they are specialists in air pollution, which is what I would like to work with. Via a contact, my partner and I got in touch with Henrik Skov, and thereby we started to work with black carbon at the Station Nord in Northern Greenland,” says the Dane Ingeborg Elbæk Nielsen.

“I have become really glad to be out here. People are friendly, and I think there is enough time for the problematic issues you might have. I am actually very surprised about the surplus and interest that people give the students here.

Earlier I did not even think of being a PhD student, but both the professional field and the course of my Master’s thesis convinced me - and it is also difficult to get to work with this kind of field elsewhere. And I just think there is a very good energy out here and an excellent learning environment. There is taken care of one, and it is always nice.”

“I think it has been really fantastic, and I am extremely satisfied.” 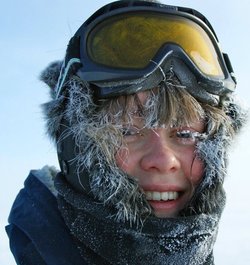 Because the Nordic countries are leading in the area of environment

”I chose to go to one of the Nordic countries because they are leading in environmental policy and green economy. I have always had a dream of learning about the environment at a Nordic university. I ended up at the Technical University of Denmark (DTU) for four months during my master degree, and there was a nice environment - there is no need to be afraid of the cold weather in Denmark.

Then I saw an announcement of this PhD position at Aarhus University. It was actually my former Italian supervisor in Siena, who showed me the announcement and encouraged me to apply, because he was in contact with my current supervisor."

"I had the advantage that there were two Italians in the group working on the same methodology that I was using in my project when I arrived, so they introduced me to the work. Recently I have moved into the same office as two other PhD students which is a great advantage.

On the one hand I miss the big campus with a lot of people to talk to, like in Aarhus, but it is nice here in Roskilde, because it is more cosy. You don’t have this feeling that a person is a complete stranger, and you can approach everybody: professors, students, secretaries. You don’t feel the hierarchy at all." 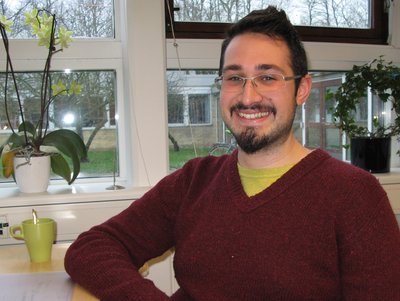 “During a stay in Madison, USA, I became very interested in environmental sociology. When I came back and had to write my Master’s thesis, I saw a poster from my current PhD supervisor, Lars Kjerulf Petersen, in which he searched for students writing the MA thesis. So Lars became my co-supervisor, that was actually kind of funny - but I never imagined that I should be writing a PhD. But when Lars showed me a bill, I made an application because I believed the projects was exciting”.

"I see it as an advantage that we are such a mixed group with many disciplines and nationalities, all in one place. Here is a very relaxed environment, and that has definitely some advantages.

The very small sociology group has helped me to get closer to the other PhD students. It is always funny to be together with other nationalities.

I am also networking with a group of people at University of Copenhagen which are working in almost the same field." 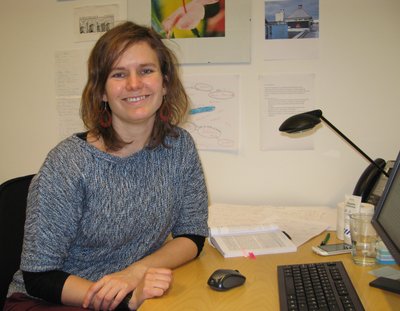 I wanted to go abroad and saw a fellowship to go to Denmark and thought: Why not, it’s not an Arctic climate! So I applied and received the fellowship. Then I started to look for a university. My area of interest is somewhere between chemical risk assessment and policy making. I could only find this interdisciplinary field at Aarhus University. It turned out that I had already read some reports from the department.

My supervisor helped me a lot in the beginning and our secretary helped me to rent a room.

Everybody is kind and speaks English very well, but when I started I was the only non-Danish speaking person in the group, so there was a lot of lunch talk in Danish. Now the situation has improved, since we have more foreigners. The easy way for me to meet other PhD students, however, is to go to the Friday bar with our neighbours here at Risø. This is informal, so there  you can chat.

I appreciate that the PhD students here have the freedom to work on a flexible schedule.

Many PhD students choose to live in Copenhagen, but I like to stay in Roskilde. It’s not that small, it’s beautiful and I like to cycle to and from the university. 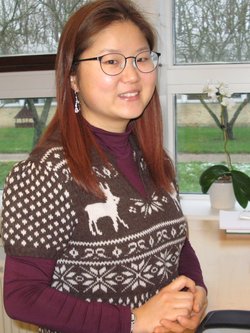 I found the position at a German website on chemistry

I checked a German website on chemistry where I found the call for applications for this position in Roskilde and I thought; why not Denmark? I had considered going abroad for a long time. I have spent much time in Sweden because my family has a summer house there. I have also been to Sweden (Gothenburg) on an Erasmus grant and thought that I would like to go to Sweden; but however, Denmark is closer.

When I had completed my MSc I was not sure whether I wanted to do a PhD or not. I started working as a research assistant because then I could get my research financed for two years. However, after seven months the financing was guaranteed for three years, and then I started on my PhD programme.

It was really great; I have nice colleagues here and a good working environment. We were two foreigners who started working on the same day, and together we figured out a lot of things. At first, it was difficult to get into contact with others outside the working place, especially the Danes. I quickly met other PhD students from Aarhus University and the Danish Technical College, but almost all of them were foreigners like myself. But this quickly changed when I started sailing viking ships in the boat guild at the Viking Ship Museum. It was also a really good way of learning Danish.

At the beginning I could read a little Danish, but I soon started on a Danish course to learn the language. However, I have not spoken so much Danish at work because we are so many foreigners here; therefore I have learned most of it in my spare time. But now I am speaking Danish with my Danish colleagues, meaning that every day I speak a little mixture of Danish, English and German. 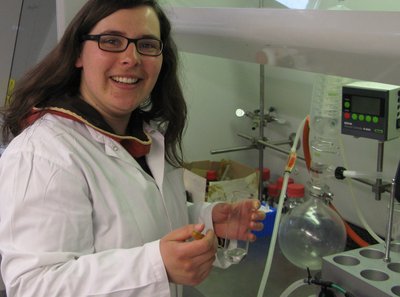